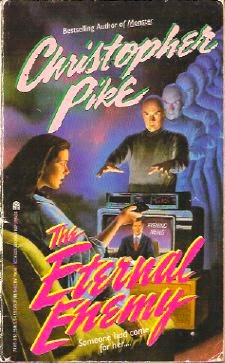 Rela is the adopted daughter of a minister who has a huge crush on a guy named Chris. At the beginning of The Eternal Enemy, she decides to buy a VCR from Circuit City (ha-ha!) to use at a big party she wants to throw. The cashier, Ed, finds her super attractive, which leads to him accepting a post-dated check from her just so she can buy a better VCR than she can afford. Though he asks her out, she turns him down because of Chris.

Her best friend, Stacey, wants her to ask Chris to her party, but she does let her know that he's been spending a lot of time with this hot girl Debbie. Rela can't work up the nerve to ask him, but Stacey does it for her. He asks her after calculus class if it's okay that he comes to the party and if he can bring a friend.

Real decides to set up the VCR to take an old alien movie that she loved as a kid, but she doesn't look at the tape after recording it. Cut to her party when she puts on the tape. She sees static and the news, gets freaked out, and turns off the tape. Chris goes with her to Blockbuster (ha-ha again!) to rent some new tapes. She also manages to cut her finger while talking to Chris and cutting vegetables and he takes care of her. He also tells her that Debbie is new to town and his cousin before he asks her out on a date.

She can't stop thinking about the tape and finally sits down to watch it. She somehow managed to tape the news, but she thinks it's odd that the newscaster keeps talking about football scores. It takes her awhile, but she finally realizes that she taped the future. She proves it to herself by making a bet with her father about the score of the football game he's watching. Real ends up winning $500 from him right before her date with Chris.

Their date goes pretty well, and he seems to like her. He talks a lot about how he loves computers and is really good with any type of technology. Chris even makes money repairing electronics for companies in town. She starts to tell him about the VCR, but changes her mind and tells him about a dream she had where he was sitting in front of a computer and mapping the human brain. Though she wants to tell him more about that dream and another dream she had about him, she stops because she doesn't want to scare him off.

Rela starts having a series of odd dreams. She sees herself in a hospital with a vial of green liquid nearby, she sees someone injecting her with the liquid, and she keeps waking up in the middle of the night in a cold sweat. After seeing another report that she recorded, she decides to take the $500 and head to Vegas. She finds someone willing to make a bet for her, and she wins $20,000+. The next report shows a group of window washers dying when their equipment breaks, and she realizes that she should use the tapes to save their lives.

This leads to her flying to San Francisco, but she only ends up saving one of the people. She tries to see Christopher, but he wants to hook her up to this new electromagnetic wave thing that he created. As soon as he tries, she freaks out and runs away for reasons she can't explain. She then has another dream of waking up in California with no memory of her former life and meeting the man who would eventually introduce her to her father.

A few days later, she hears someone knocking on her front door. It scares her so much that she literally starts shaking, but she can't explain why. Her father comes home and finds no one there. She watches the next news report, and it's all about her and how her father found her dead body in his house. She goes to her job at the library and tries to figure out what to do when she meets a man in a strange gray sweatsuit with odd eyes. The man talks to her and gives her the chills.

Rela calls Ed, tells him that someone is stalking her, and asks for his help. He agrees to meet her in a coffee shop after work and follow her home. He'll even stay the night if she wants. She then decides to call Christopher and finally tell him what's going on. When she reveals that she needs the VCR and a tape, he agrees to meet her at her house. They find all the windows and doors sealed shut, which they both think is strange.

When she watches the video, it's changed to show Christopher dead. She runs downstairs, Christopher seems weird, and then he passes out on the floor. All the lights go out in the house, and the man from the library appears on her doorstep. She makes him promise that Christopher will be all right, and he begins talking about her past. Just as he reveals that she's actually a Robotic Experimentation Logistical Algorithm, she remembers that the man is actually her grandfather.

The next part of the book is a little too sci-fi for me, so let's just summarize. Rela remembers that she's actually Sara, the granddaughter of the future Christopher. He named her after a girl he knew in high school who unexpectedly died. The future is pretty terrible. There's nuclear wars, the waters are almost all polluted, and people wait in line hours/days just to get food.

Future Christopher (FC from now on) creates the first cyborg, which somehow lets him see into the future. He discovers that nothing every changes and that no matter what he does, humanity always has a bad end. FC started with a new group, which planned to help the world, but just kept screwing everything up. He tells Sara all this, including a bunch of technobabble that made my head hurt. She decides to kill herself and have him make her cyborg so she can go back in time and end things. Sara always planned on killing Christopher, but when she woke up, she had no memory of her past.

FC (the dude from the library) plans to kill her before she can kill his younger self. He's also a cyborg from the far, far future and knows that humanity never gets any better. There's a knock at the door, and Ed and Stacey shows up. FC somehow manages to convince them that he's a nice guy and Christopher is just taking a nap on the couch. Rela manages to get to the VCR and somehow plug herself into it to record her story. She realizes that she did this all along as a way to make her conscious self realize who she was.

Ed and Stacey leave and FC gets ready to kill her, but Christopher wakes up. She tells him that she loves him, they say goodbye, and she thinks about killing him but can't go through with it. She does tell him that her real name is Sara and asks him to remember her. After he leaves, she finishes recording her story, and FC kills her.

The book cuts to several weeks after her funeral. Her father brings her VCR over to Christopher's house. He talks about finding all the money in her drawer and giving it to his mission, and he tells Christopher that he thinks he should have her VCR. After he leaves, Christopher plugs it in. He watches the story, knows that it's the truth, and vows never to become the man from the future.

Ugh. I really love Christopher Pike books, but the sci-fi books are always a pain to slog through. There was so much scientific stuff in this one that I found myself skimming pages and skipping entire paragraphs. It's nice to know that THC still exists in the future though. It's what they use to wipe people's memories. I should really call my ex and let him know what smoking pot can do to him...
Posted by Jenn at 1:53 AM